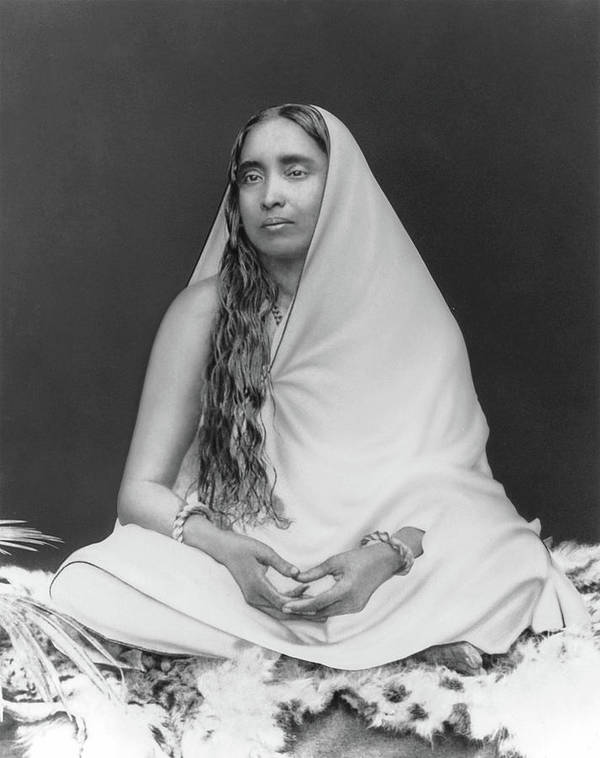 Sri Sarada Devi poster by Mr Harrington.   Our posters are produced on acid-free papers using archival inks to guarantee that they last a lifetime without fading or loss of color. All posters include a 1" white border around the image to allow for future framing and matting, if desired.

Sri Sarada Devi was the wife of Sri Ramakrishna Paramahansa. After his passing, she was the soul of the Ramakrishna Mission.... more

Sri Sarada Devi was the wife of Sri Ramakrishna Paramahansa. After his passing, she was the soul of the Ramakrishna Mission. This photograph is an optimised digital file from one of the original negatives taken over 100 years ago. In November 1898 Mrs. Ole Bull, an American devotee of Swami Vivekananda, persuaded Holy Mother to have her photograph taken. On this occasion three pictures were taken, and the second is the one most often worshipped by her devotees. Holy Mother said of it: “Yes this is a good picture. But before it was taken I was a little stouter. Then Yogen [Swami Yogananda] fell ill. Worrying about him day and night, I lost some weight. I was happy when he felt better, but very unhappy when he was worse. Often I wept for him. At first I refused to be photographed. But Sara [referring to Mrs. Ole Bull] pressed me and said, ‘I shall take the picture to America and worship it.’ In the end I had to agree.” (Holy Mother by Swami Nikhilananda, p. 114). This picture...